The knee is a very complex joint and many knee injuries and conditions can be inter – related between the knee and the foot and ankle and visa versa due to the biomechanical effects these joints have between each other.

Podiatrists play an important team role in the treatment and management of many knee conditions in both adults and children, whether your knee pain has been caused by a fixed structural condition e.g knock – knee, by a simple fall, or a sports related injury.

Below are some common knee complaints which can respond well to Podiatric treatment and management.

This is pain in and/or around the front of the knee or knee cap. This typically is worse with repeated bending of the knee when running and going up or down stairs. The pain is typically non-specific with little or no swelling. People will complain of a grinding or clicking sensation from behind the knee cap.

Cartilage irritation or deterioration, usually under the kneecap, can be caused by a biomechanical imbalance and weakness of the quadricep muscles, especially the inner quadricep muscle known as the VMO or Vastus medialis and an over tightening of the Iliotibial band.

Patello-femoral joint pain is also often associated with pronated feet that causes an increased strain over this joint surface as the foot and knee roll inwards.

Controlling this excessive rolling in action with Orthotics will help to stabilise the over strain on the tendon and reduce pain and swelling.

The patella or knee cap is embedded within a tendon and runs in a groove at the front of the knee, attached to the lower end is the Patellar tendon which inserts into a boney prominence at the top of the shin bone (tibia).

Those athletes involved in jumping and throwing eg Badminton, Basketball can damage the attachment of the patellar tendon over the lower end of the patella and cause a partial rupture.

Strain over the entire length of the patellar tendon is also often associated with pronated feet that causes an increased strain over the tendon as the foot and knee roll inwards.

This condition is often seen in young teenage boys than girls between the age of 10 and 15 who are very active in sports that involve running, jumping and kicking and can often be associated with overuse of the inner quadricep muscle which causes repeated trauma over the attachment of the patellar tendon to the tibia which is still growing.

Sometimes small flakes of bone can be pulled off the tibial attachment and lodge in the fibres of the patellar tendon and cause the enlarged boney lump.

Strain over the entire length of the patellar tendon is also often associated with pronated feet that causes an increased strain over the tendon as the foot and knee roll inwards. 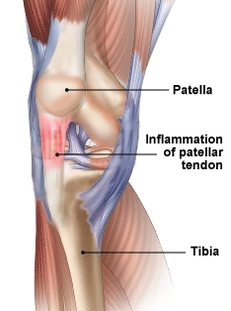 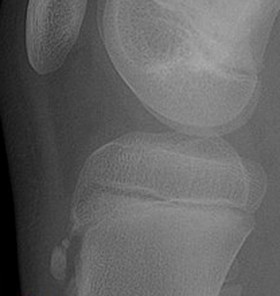