Pain and swelling of the joint occurs which is often accompanied by a bursa (a fluid filled sac formed between the bone and the skin).

Surgical correction of a tailor’s bunion is aimed at reducing the prominence surrounding the fifth metatarsal and reducing the metatarsal angle, surgery is similar to that undertaken to correcting a bunion on a big toe.

Surgical recovery is generally 4 – 6 weeks after which patients can begin to return to normal activities and footwear. 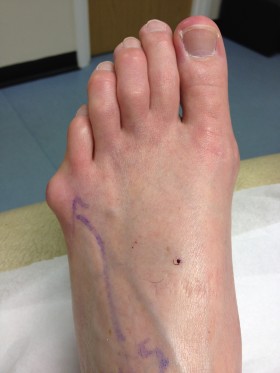