Podiatric surgery and the arthritic foot

Undertaking surgery to the arthritic foot is a challenge and often dependent upon the type of arthritis, its severity and the degree of joint damage, particularly to the articular cartilage of the joint which is responsible for its smooth, pain free motion, arthritis generally destroys this cartilage given time.

The principle aim of the surgeon is to wherever possible reconstruct the joint and slow down the progression of the disease along with medication provided by the patient’s physician, however this is not always possible especially after prolonged arthritic change so surgical procedures are generally split between correcting joints which show early to moderate disease and late severe degeneration.

Surgical procedures used in early disease might include simply removing inflammed soft tissue (synovial pannus) from around the joint as this is responsible for the destruction of the vital articular cartilage, the swelling and pain patients experience, more often though this will be combined with the removal of arthritic bone from the joint margins (Cheilectomy), this should restore pain, free movement to the joint and delay progression of the disease. 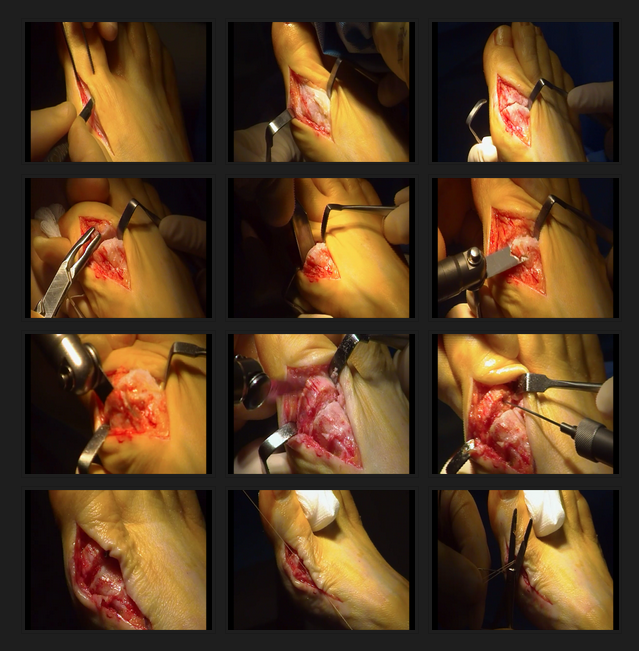 These procedures are called osteotomies, the bone being held together until healed by tiny screws, threaded wires and metal plates which generally stay in place forever unless they cause a problem at which point they can be removed after 6 – 10 weeks, most patients need NOT be placed in plaster casts and begin to walk after 2 weeks rest at home.

In those patients with longstanding severe joint destruction and deformity, the surgical reconstruction is not generally an option, the aim is to reduce pain by the removal of the boney deformity often in an effort to eliminate recurrent ulceration despite adequate footwear.

Generally with inflammatory disease all the metatarsophalangeal joints (the balls of your feet) will be affected especially the lesser toe joints and destruction severe, bone quality is poor and the procedure of choice is to simply remove one, but more often all of the joints to create a slightly shorter foot and remove pain under foot.

The big toe joint is fused together in a position that will allow the patient to walk pain free and with markedly increased stability, this type of fusion is called an arthrodesis and can be applied to toes to deal with clawed and hammered toes which have become fixed and irritated by footwear.

Toes which are still flexible to a degree can sometimes benefit from arthroplasties, where the Podiatric surgeon removes a small piece of arthritic bone from the joint, the body heals the area by laying down fibrous tissue which creates a false fibrous joint still capable of some movement, although never as good as a normal joint, it functions reasonably well and can always be fused at a later date if required.

A developing area of joint replacement especially in those patients who have good bone density and alignment is by using implants specifically designed for the foot and made of ceramic materials, although they have yet to be fully evaluated long term, and should offer improvement over silicone implants which are better suited to the hand, overall joint reconstruction should be attempted first before implants are considered. 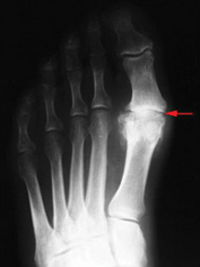 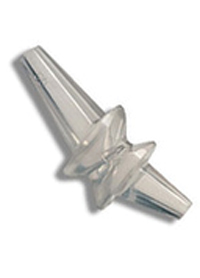